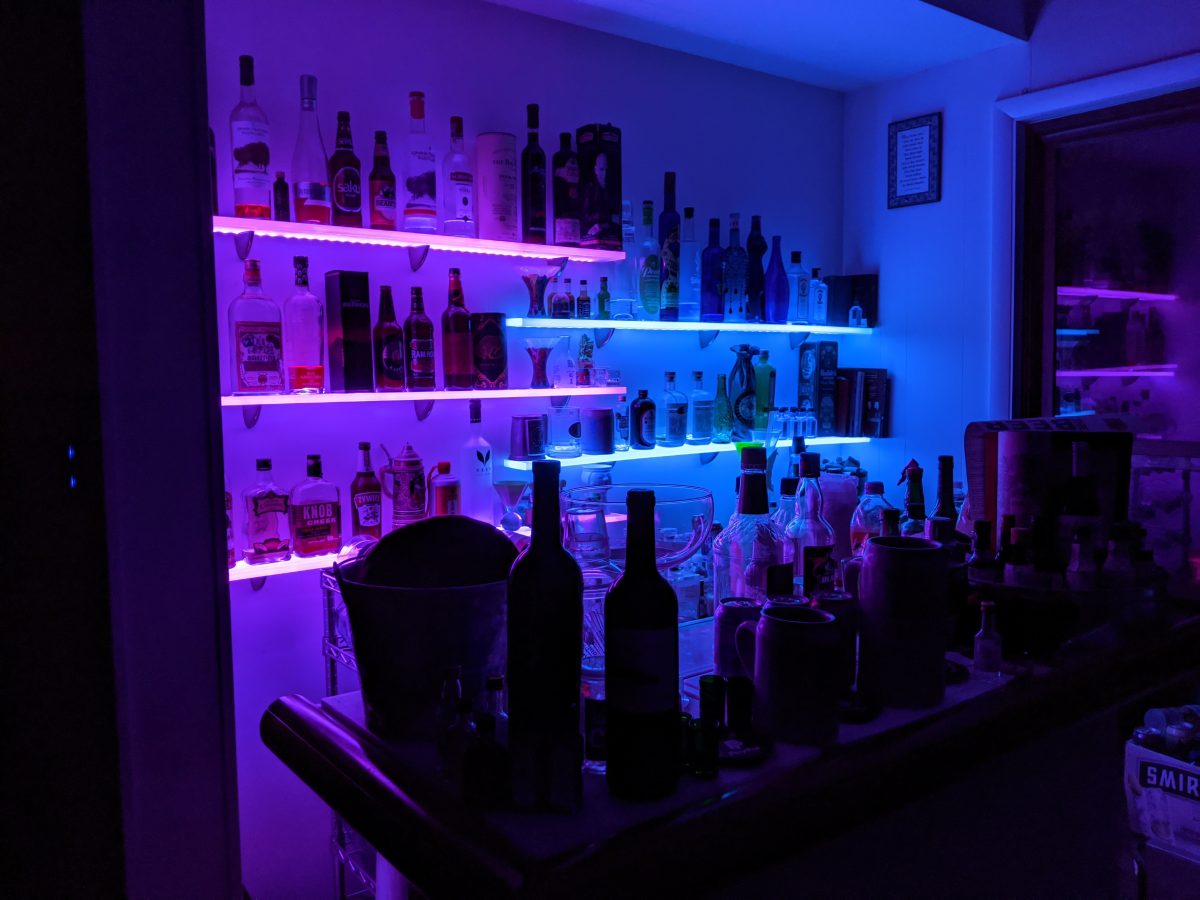 I like cocktails. I like trying new ones, experimenting with different ingredients, etc. I’m sipping one of my favorite concoctions right now as I type this.

But, as with so many things I think that the recent “cocktail craze” has made it seem like you can’t start making cocktails at home with a second mortgage worth of fancy booze just to get started. That’s ridiculous!

I think I should be clear here about what my preferences are when it comes to cocktails, because it’s reflected in the ingredient discussions below. I like heavy, boozy cocktails like manhattans, martinis, as well as fancier things like the vieux carre, the last word, etc. A good margarita is wonderful. Even something like a cosmopolitan can be great. The problem is that so many bars/restaurants like to make super-sweet cocktails, and things like margaritas or cosmos can really fall into that category. If that’s your thing, no worries!

Here’s the thing – yes, there’s a huge difference between your bargain level whiskey and a $90-100 bottle of bourbon or Scotch. Usually! But, if you’re going to be mixing it with other ingredients – especially if you’re not sure what you’re doing – is it worth the extra cost? A cheaper option may get you 80-90% of the way there, and makes it way easier to build up an idea of what you like, as well as giving you the freedom to make mistakes. If you’re just starting out, start cheap and experiment away.

So, for me a bar has to have these basic ingredients: Gin, Vodka, Whiskey, Tequila… and maybe Rum. Those are your bases that everything is built on top of. Around here I can 1.75 liter bottles of each of those from $10-20. Are they great? Not really, but it’s not like you’re going to be sipping them at room temperature from a tumbler, probably. You’ll be shaking them up with ice and a bunch of other ingredients. As with most things, paying more does not necessarily mean a better experience.

As you experiment, also try different cheap base alcohols. In my opinion the bottles at the bottom of the rack are competing in a very tight category, there’s tons of companies selling in the cheap category w/out very much to distinguish them since their customer is generally price sensitive. You may find something surprising! We like the McCormick gin, Crystal Palace vodka and Early Times bourbon for example.

Now you need some extras. At least get some of the basics: angostura bitters, red and white vermouth, cherries, etc. If you see a cheap mixer like a margarita mix or something, why not try it? Get a bag of lemons or limes. Olives! Try to find a cheap cocktail shaker. Get an ice cube tray if you don’t have a source for ice cubes.

I’m very skeptical about glassware. Yeah, a martini glass can look really cool. It’s also very easy to tip over and break… I’m not sure that it makes much difference at all to the actual taste. I think any old glass is a good starting point if you’re trying to keep the budget down.

Here’s one of my secret weapons. We call it “green stuff” – it’s actually DeKuyper sour apple pucker. By itself, it’s pretty sweet but does have a nice sour apple flavor. But it makes a great ingredient to play with. Want to have a different take on a manhattan? Add a splash of green stuff… The drink I mentioned at the top is gin on the rocks with a bit of green stuff.

With those ingredients you have a nice base for a variety of experimenting. The manhattan is a good starting point – whiskey, sweet vermouth and bitters. Cherries and cherry juice if you want. Google and you’ll find a variety of ratios – I tend to around 4 parts whiskey, 1 part vermouth and 2 dashes of bitters. So that’s the “base” – now play around. Add some “green stuff” (maybe 1/2 a part). Or try an apple-flavored whiskey. Try white vermouth. Try one of the million different varieties of bitters. Try a cheap scotch instead of bourbon. Some of these might be terrible, but I think if you don’t stray too far from the original recipe (and you like manhattans to begin with) you can’t go too far wrong.

You can do the same with martinis – the basic martini recipe is vodka or gin, mixed with white (dry) vermouth. Basic indeed! Add olive, and if you want it “dirty” add a little olive “juice”. But try some other additions! Add Peychaud’s bitters. Or a bit of juice (cranberry) or a little of the “green stuff”. Try it with sweet vermouth. Try various flavored vodkas, there’s only about a million.

Margaritas – my recipe is 1 part gold tequila, 1 part silver tequila. Juice from one lemon/lime. 1/2 or 1/3 part Triple Sec. That’s a pretty potent margarita, of course add water or triple sec to your taste. But again, why not add other things? If you think about it, it’s tequila and lemon or lime juice and a something sweet. The other night I tried one that substituted that 1/3 part of triple sec with 1 part of orange juice. It was pretty good but not as good as a “normal” margarita – glad I tried it though! And also lower on the calories since triple sec is basically all sugar.

One more custom recipe – the “gin rummy” – this is one I came up with maybe 10 years ago. The basic ingredients are gin, “green stuff”, coconut rum and grenadine. The ratios have changed, and lately I’ve just dropped the grenadine altogether as unnecessary. Try 4 parts gin, 1 part green stuff, 1/2 part of coconut rum. Let me know what variation works for you!

Moving up the food chain

Once you decide to branch out into more expensive bottles, it gets really hard to decide what to spend money on. If you happen to go out to a bar, try cocktails that have ingredients you haven’t experienced before. You’ll be paying a premium anyways. Talk to the bartender, they may even give you a little taste of that weird herbal liquor that’s one of the ingredients.

There’s lots of these European herbal liquors that are great – Aperol, Campari, green Chartreuse, yellow Chartreuse are all wonderful to add to your bar. Luxardo is something I want to add. You can also add other types of liquor like brandies, cognacs, etc. Some of these you can actually buy in those little 1 ounce bottles at some liquor stores if you’re not sure you want to commit to the big bottle.

If you have local distilleries, check them out. In Michigan there are places that will do actual tastings, just like a wine tasting, with all sorts of interesting things. For example, up north there’s a place that does a popular horseradish vodka. Not my thing, can’t stand horseradish. But they used it to make a pretty good Bloody Mary and I don’t typically like those.

Another benefit of getting the cheap stuff is you can try making your own infusions. For example, I grabbed some bitter little crab apples off a tree in the yard, cut them into bits and put them in an empty bottle with some cheap vodka. It turned out pretty good – but if it ended up gross, I’m not out more than a few bucks. Why not? Just make sure anything you’re using is actually edible for humans!